Around the world, protests and celebrations are taking place to mark International Women’s Day 2019.

In Dublin, crowds gathered at O’Connell Bridge for the Time for Equality protest. The aims of the protest were to call for an end to gender based violence and harassment, an end to the gender pay-gap and precarious conditions in work and housing, as well as to show solidarity with the struggle for abortion rights in the North.

Among the speakers was 16 year-old school student, Haritha Olaganathan, who called for climate action as well as better sex education in schools. “We have a responsibility to fight for comprehensive, inclusive and mandatory sex education in all schools regardless of faith,” she said. 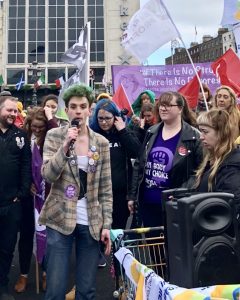 White added “When we struggle together we’re stronger. As we’ve seen with marriage equality and the abortion rights movement — we did struggle together and we won. It’s important that we link up so we can liberate everyone.”

Aisling Cusack, the Vice President for Equality and Citizenship at the Union of Students in Ireland said “Sexual harassment is rife in our third level institutions and it isn’t being adequately dealt with.” 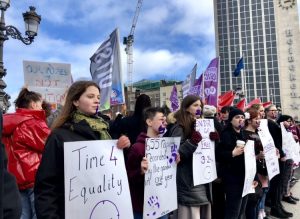 Cusack told the crowd that moving forward “We all need to be active participants in challenging a culture of sexual violence and harassment. Call out the sexist jokes, call out the unacceptable behaviour of your friends.”

At a special Cabinet meeting for International Women’s Day, the Government ratified the Istanbul Convention, which requires criminalising or legally sanctioning different forms of violence against women, including domestic violence, sexual harassment and psychological violence. 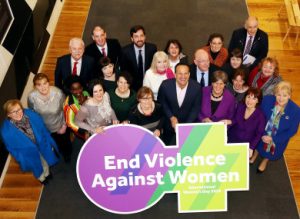 In her speech at the International Women’s Day protest, Solidarity TD Ruth Coppinger said she was glad the government ratified the Convention but that “It is utterly meaningless if refuge centres aren’t resourced, if rape crisis centres can’t answer their telephones, and if the housing crisis continues.” She called on the government for action regarding these issues.

Coppinger also praised workers at Google and McDonald’s who have taken decisive action against sexual harassment.

Homeless Period Ireland, an initiative that aims to end period poverty and normalise periods, also held an event in Dublin earlier in the afternoon. Ruth Coppinger has announced on Twitter that the issue of period poverty will be brought before the Dail next Wednesday.